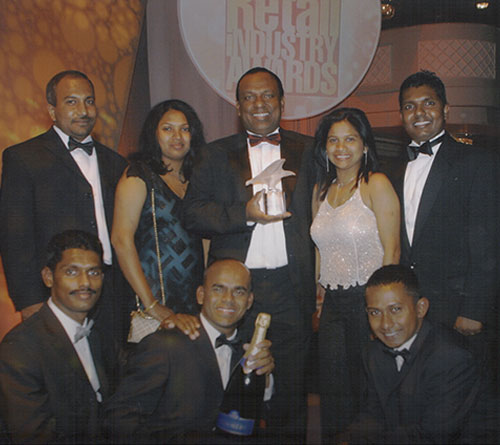 MSP Systems Ltd was founded in 2005. It is part of the MSP Group that was founded by Romesh Perera, and has been trading in the UK Retail sector since 1997. The Group has won several highly prestigious retail awards throughout the years.

Romesh been a very successful retailer with several retail outlets and many years of experience behind him recognised the need for a Retail system that put the retailer first. The systems that were being used gave the impression that they were written by programmers and the Retailer (the user) had to always work around the system to achieve the results he/she wanted.

Romesh with this retail experience coupled with computer knowledge provided the platform to design an EPOS and Stock Control System with the Retailer as the main consideration.

Romesh called upon his resources and started laying down the foundations of the system. They were always aware that unless the foundations were strong then the program would not stand up. They made a feasibility study of how to make the design a reality, and decided to outsource the programming to India due to the quality of personnel and the cost savings involved. On 1 February 2004 they set up an operation in India with 4 programmers.

After almost two years and a lot of hard work the “system” was ready for testing. It was extensively tested in the MSP stores.

The Company – MSP Systems Ltd was formed in April 2005 and on 1st July 2005 a three lane system was installed at an independent store in Euston London. Vijay Patel the client still uses MSP System that has evolved incredibly since inception. They were on their way!!

It was a slow process, a management decision was made that MSP Systems would progress slowly, although totally confident in the product, they were careful to avoid the mistakes that others had made. The System boasted that it was “designed by retailers for retailers” so they spent time listening. The programmers in India were constantly enhancing the System and so it was just getting better. From day one the Company has adopted the policy of one version, so every client is updated with the improvements as soon as the amendments were released after testing.

The Company’s reputation was spreading; all new business was being obtained by recommendations. They were able to make a presentation to Senior Management at Nisa Today, and were one of the first in the industry to successfully complete the Nisa OCS link.

Month on month the client base grew and in July 2007 Amit Dhami joined the company as a junior developer where it was obvious from the beginning that he had exceptional skills to benefit the company. His grasping knowledge together with his analytical skills coming from an engineering background helped him to progress through the ranks and take control of development in India. He became a Director in 2010. He plays a key role in all development in India.

Sydney Pietersz joined MSP as a junior engineer in October 2009 with vast amount of experience in computer assembly and hardware knowledge. His strength and work ethics pretty much suited the Company and soon progressed within the Company. He has now joined the Board as a director and heads installations in UK.

The Company has gone from strength to strength; the client base has been achieved totally by reputation and word of mouth.  In 2015 they reached the 350 clients and growing rapidly but the core principle of customer service and retailer focus remains.

Company Ethos:
“Our greatest asset is our employees. Each employee contributes to the Company's progress with pride and dedication. The Company with humble beginnings owes to its servants for they in turn value services hired by its clients. Our objective remains to serve clients with exceptional service.”